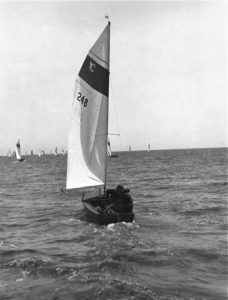 My late father, Frank Pettitt, sailed Seafly 248 in the late 60’s and early 70’s, including the National Championships. I would like to find out more about his sailing exploits. I used to crew for him on his Merlin Rocket before he got the Seafly on which I also crewed at times. But his normal crew was a guy named Mac Haggar (the photo shows them heading for the start during Worthing 1971). They were members of Seasalter Sailing Club near Whitstable in Kent. Dad was Vice-Commodore for a time.