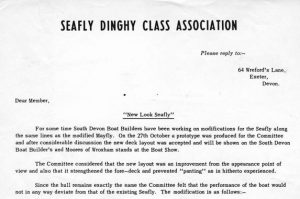 Despite being a “One Design” Class it was perhaps inevitable that changes in building materials and sailing techniques would lead the Seafly Dinghy Class Association to approve various changes in the design of the Seafly hull. Towards the end of 1963  a letter was sent to members of the Seafly Class Association with details of a new deck layout. The main changes were to the foredeck, which was raised with the mast now stepped in a well to maintain the same height above the keel as the original design. 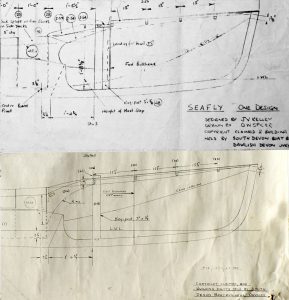 Foredeck detail for the new look Seafly (top) and the original Seafly (bottom).

The (full height) forward bulkhead was moved aft to a position just forward of the kingpost and the waveboards also moved aft being now situated at the aft edge of the foredeck. The aft-most deck beam, which had been aft of the mast step, was moved forward resulting in the deck beams being slightly closer together.

The transition between foredeck and side deck became a step, much simplifying construction compared to the original “roll-down” feature. The photos below illustrate the changes. 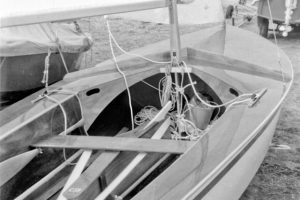 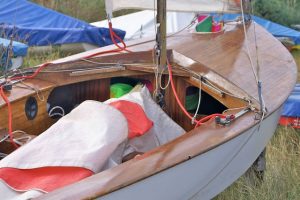 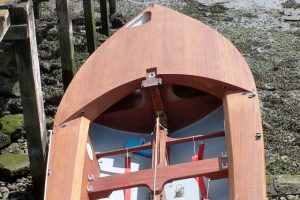 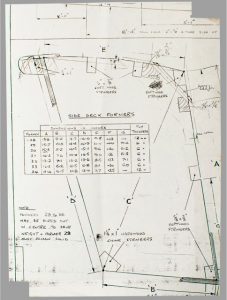 Later changes included reducing the height of the forward buoyancy tank allowing the spinnaker to be hoisted through the foredeck (already implemented on Seafly 388 above) and an optional change to the side deck profile. These changes are evident on the later Seafly (sail number 650), and note too the lack of any wave boards.

Even more radical changes were suggested for a “Cruising Seafly” but only one or two such boats were built. The modern “Seafly SD” has a new deck layout and a self draining cockpit. These developments are described on separate pages.

SeaflyMemories > Seafly Design History > The “New Look” Seafly
Because we use Google Maps and other services, using our site may place cookies on your computer. If you continue to use this site we will assume that you are happy with it.Ok