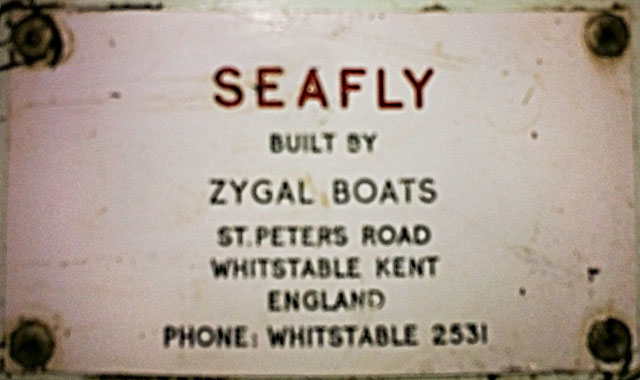 When South Devon Boatbuilders ceased trading in 1974, Arthur Edmunds of Zygal Boats at Whitstable, Kent, obtained a licence to build the Seafly in GRP*. 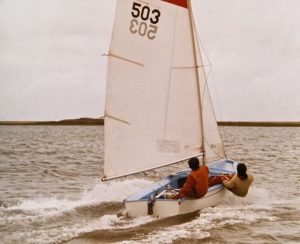 Zygal exhibited their first boat at the March 1975 Crystal Palace Dinghy Exhibition. The advert (below) is from the October 1975 SDCA Newsletter.  Zygal produced GRP boats only; their October 1976 “Policy of Sales” stated that you could apply to Zygal for permission to “home-build” a wooden boat (on payment of a royalty) but that it would not be Zygal’s policy to license professionally built wooden boats.  The sails supplied by Zygal were made for them by Atlanta in Ireland.

Zygal used a double skinned GRP construction method (illustrated here) which caused some boats to become over weight for racing. Nevertheless Zygal boats did achieve racing success, for example C523 was second in the 1979 Nationals, and the photo shows a Zygal boat, C503, being sailed by the very successful racing team of Morris and Eric Arthur. Some considered that the extra layer of GRP gave them extra strength and made them “ideal for cruising” (Bridget Baines). 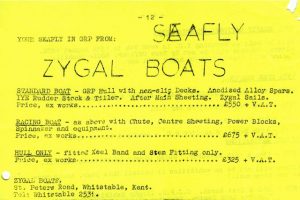 It was unfortunate that, in April 1975, the tax on sales of “luxury items” was increased from 8% to 25% with dire effects on the boating industry. Zygal were unable to develop the sales outlets they had anticipated and in 1978 passed the GRP moulds, with a licence to build in GRP, to Colin May who founded C.M.Marine in Christchurch, Dorset. Also in 1978, Dick Flower, who had moved from Kent to found Dorset Dinghies, was licensed to build a small batch of wooden Seaflys. In 1980, C.M. Marine obtained the design copyright from Zygal who continued as boat builders in Whitstable Harbour until the mid 1980’s. 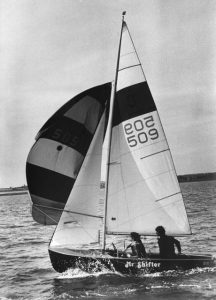 It is not obvious how many Seaflys were built by Zygal. Sail numbers in the 500 to 510 range were built around 1977 while the first boats by C.M.Marine and Dorset Dinghies had sail numbers around 620 upwards. Few boats with sail numbers in the 510 to 600 range are recorded in the membership lists of the SDCA in the 1990’s and few such boats are listed in our “Seafly Register”. Possibly Zygal reserved a batch of sail numbers in the 500’s but the boats were never built. Ironically, being all GRP, Zygal boats which still survive are now desirable for their low maintenance qualities.

[Next: Zygal Seafly Build Details (or go on to Dorset Dinghies and Bob Hoare)]

SeaflyMemories > Seafly Boat Builders > Zygal Boats
Because we use Google Maps and other services, using our site may place cookies on your computer. If you continue to view this site we will assume that you are happy with it.Ok