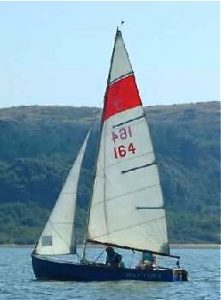 I have owned and sailed 164 since 1986 during which time I have been a member of Highcliffe Sailing Club based in Mudeford. Although somewhat tired looking, she still performs beautifully and is so well balanced. Such a seaworthy craft and ideal for Christchurch bay. We had a fleet of over 30 in the club and used to host the National Championships where one year 164 was taken to the head of the fleet – not by me I hasten to add! She still has the fibreglass spinnaker shute which is a pain with a wet sail. Great with a steady F4 to get her up onto a plane. The all wood construction needs regular tlc, but I have at last got her reasonably continent around the centre casing. I can’t imagine replacing her with a more modern and heavier fibreglass model. She is currently called ‘Toccatina’ but was previously ‘Whodat’ owned by Ian Pike (HSC).
The photo dates from mid 1980’s and featured on the Geocities website comprising a description of each type of dinghy. I have no idea who took the photo it just appeared in their catalogue.