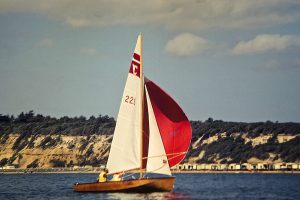 C220 Zipper being sailed by Ken Donaldson, her original owner

I own Seafly 220, named “Zipper”, and I sailed her competitively until about 2 years ago. She is currently laid up in the roof of my garage while I sail other boats. I have made extensive repairs in the 8 years I have owned her and need to do a bit of work before I sail her hard again, including minor hull repairs, re-painting, new mast and sails. She has a builders plate from Harold Lang of Sorrento in Victoria. I gather she was built in the early/mid 1960’s. A trapeze was fitted at some stage (I understand the class rules changed – maybe only here in Australia?). I think Zipper (her original name) was mainly sailed at the Mt Martha Sailing Club here in Victoria. I think Mt Martha and Canberra were the only Australian clubs that had fleets.

She is a delight to sail. I have built an identical sized boat (a John Welsford design called a “Navigator”) and whilst it sails well, it highlights the balance and speed of the Seafly. My only complaint about the design is that the fullness of the bow makes it a hard slog in 20 knots plus and waves over 1.5m.

I currently sail at the Williamstown Sailing Club in Victoria, Australia.