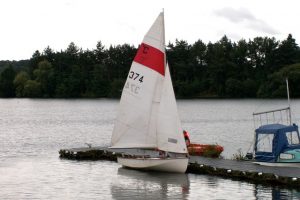 Seafly 374 has a composite hull (grp with wood decks). I bought the boat last year on eBay for the princely sum of £312 and then spent almost £200 getting her seaworthy. When I have got more time I will a bit about the restoration process for the benefit of anyone else who wants to deal with delaminating decks and the various other issues of restoring an aging dinghy at minimal cost. The boat sails well, but I have not spent enough time on the water to get the full measure of her yet. Tony Longworth in Cumbria was very helpful and encouraging and I would recommend his generous services to anyone wanting information from someone who really knows the marque.

I am a member of the Spinnaker Sailing Club in the New Forest and the boat often gets curious looks and enquiries from people used to the usual fare of Wayfarers, GP14s, Enterprises, Wanderers etc.

Update: April 2012 I took my Seafly (374) off the water last year because the deck was delaminating badly and spent the summer redecking the boat. The previous owner had rearranged much of the deck-mounted gear, including the spinnaker bits and I’m having trouble working out where they should go. I have replaced the knackered sliding fairleads with original gear bought off EBay using the old holes in the deck to position them correctly, but the locations of the spinnaker fittings are less obvious. I did not renew my membership of the Spinnaker Club in Ringwood last year and will probably move the boat down to Calshot so that I can get some “real” sailing in this summer.