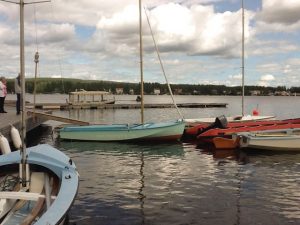 I own a small dinghy hire fleet in Falun, Sweden. Seafly 433 is one of my boats. I bought her from a South African guy in London around fifteen years ago and took her to my second home in Sweden. We have a 66sq km lake here with over fifty islands and so she has been well used by the family for exploring.

I set up my dinghy hire business Runn Sailing when I retired five years ago and moved full time to Sweden. Initially I just had three Wayfarers but then customers were asking for something a little faster and so I put the Seafly into the mix. Her season this year has ended early owing to some major transom damage caused by swell from a passing motor boat. I’m pretty sure she’ll be back next season though.