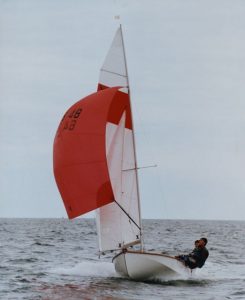 Update October 2019: Roger Beavis writes… “I have acquired Seafly 648 Mistress. It needs a fair amount of work but I hope to have it on the water next year at Blakeney.”

This Seafly Dinghy Class Association publicity photo is probably of Alan Brook from Starcross Yacht Club sailing Seafly 648 in the early 1990’s. By 1996 the boat was called “Mistress” or “The Mistress” and was owned by Ewan Barnes of Highcliffe Sailing Club.

At some point in time “The Mistress” moved to Herts County Yacht Club and in summer 2017 it became owned by Ralph Freeston.