In the 80s and 90s I initially owned C69 from 1984. I bought her from Peter Jones (C645) and she was an old wooden boat which had been rebuilt and lightened by father and son, John and Alastair MacPherson (C636) who lived in Barton St. David and raced at Highcliffe SC. I enjoyed racing C69 with various crews until my son was old/big enough to crew for me in about 1986. The foredeck on C69 was replaced after I let the mast fall down and the new deck was lower to meet the recently revised rules and had no washboard.

In late 1987, after the Great Storm which wrote off some Seaflys at Seasalter SC in Kent, I agreed to buy C649, a new foam core sandwich construction, from the builder Colin May for £2,600. Although C69 was on the HSC dinghy park during the storm she was undamaged in the chaos apart from a snapped forestay but we had to lift her out over other piled up boats; I sold C69 because I felt that I had done as well as I could in racing her but she was too heavy and I was always overtaken on the run. She was sold to Alison and Richard Jefferies who then passed her on to John Foskett, all of HSC.

I took delivery of C649 in February 1988 and raced her with better success at National and Open meetings at Starcross, Seasalter, Worthing, Blakeney, S.Cerney, Burghfield, Spinnaker Lake nr. Ringwood, Chew Valley Lake and Lymington. My son and I regularly raced C649 until he went off to University in 1991; my eldest daughter occasionally crewed for me thereafter or I took whomever happened to be around. However not having the same sense of telepathy as with my son I sold C649 in 1998 to a keen sailor from Carlisle who kept her at Glenridding Sailing School and sailed on Ullswater – he wrote in the Seafly magazine some hair raising accounts of flying down the lake. I sold for £2,000 and lost track of the boat after that.

The montage of Seafly photos are all C649 or C69 with the exception of just one boat (with brown sails that we hired on holiday in France) and a shot of Mike Hartnell’s C626 with my daughter crewing at the 1990 Nationals held at Seasalter in 1990.

Glenridding Sailing School was owned and run by Kate and Tony Longworth who were great Seafly fans and had several boats there. I would imagine mine was the newest Seafly at that time. The Seafly fleet at the four main centres (Highcliffe, Seasalter, Worthing, Starcross) was very much a family affair where at the Nationals all the families camped together and crews were often sons or daughters with the rest of the family minding the future upcoming crews and eagerly watching the racing from the clubhouse. The best position that I came in the annual 6 day Nationals was 5th. out of a fleet of about 29, I think at Seasalter in 1994.

The first photo is a SDCA publicity image, the second is at the 1989 Worthing Nationals (from Graham Uren). 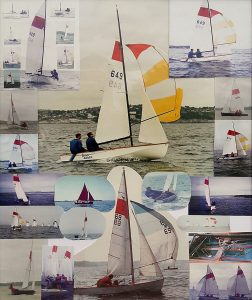 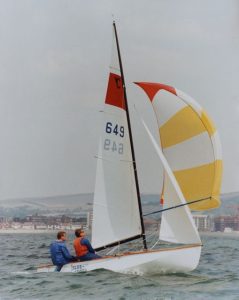 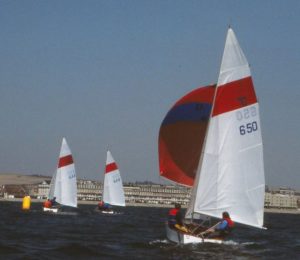