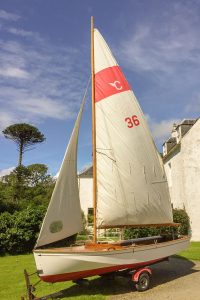 “I am the new owner of Seafly 36, ’Avocet’. The two photos show her outside her new home at Talisker Bay in the Isle of Skye, Scotland.

I note from your register that this boat was advertised for sale by Peter Malby of East Sutton, Nr Maidstone and was bought by a couple who used to own Seafly No.3. This July, I bought No.36 from a boatbuilder in Oban who I believe moved from Kent up to Oban in Scotland 18 months or so ago. The vendor is also an accomplished marine artist and painted an avocet on the transom, thereby naming the boat. Alas, avocets are common along the Kent coastline but are all but unknown up here on Skye. 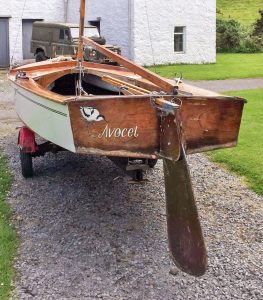 Avocet is just as described in the 2016 advertisement but lacks the spinnaker. She is a much admired, happy little boat. I am an inexperienced sailor and the seas around Skye are notoriously dangerous so I am being somewhat cautious at the moment, restricting her use to the usually calm Loch Harport, by the Talisker Whisky distillery.”

On advice from “SeaflyMemories” in March 2016 Seafly 36 was advertised by Peter Malby on Apollo Duck and was bought the same day by a couple who used to have Seafly No 3 some years ago! Details in the advert were: