The Seafly, in design, is clearly a larger version of the Mayfly which was designed by John Kelley, a “successful 12ft and 14ft National Designer, builder and helmsman”  – according to South Devon Boatbuilders 1950’s Mayfly advertising brochures. Indeed, in the 1950’s Kelley appears to have been running the SDBB firm.

By the time the Seafly was first launched in about 1961/62,  SDBB was being run by Stan Herbert. The 1962 Dinghy Yearbook*, in text probably based on an SDBB press release, described the Seafly as being “developed in response to continued demand for a larger version of the Mayfly”. On each sheet of the original Seafly plans it says that the Seafly was “Designed by J.V.Kelly” and that the design copyright was owned by SDBB. A similar statement appears on the General Assembly plan for the new look Seafly, introduced around 1963 (reproduced above). 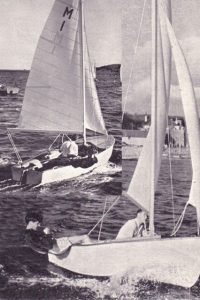 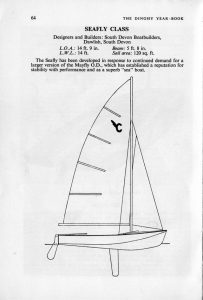 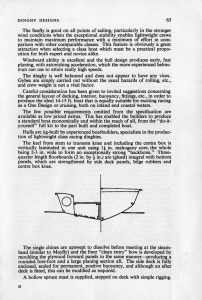 Thus evidence from the 1960’s clearly indicates that, having designed and begun building the Mayfly in the 1950’s, J.V.Kelley designed the Seafly in the early 1960’s on behalf of SDBB as a larger version of the Mayfly.

It is therefore surprising to find, in the Seafly Dinghy Class Association Handbook (circa 1971) an anonymous article entitled “History of the Seafly and the Association” which states:

Similar statements appear in a number of later SDCA and other documents, and Stan Herbert becomes variously credited with designing or developing the Seafly.

It seems quite possible that the 1971 Handbook article was written by Stan Herbert himself. By the 1970’s Herbert was a leading figure in the Class Association and was a staunch defender of the strict One Design status of the Seafly. However SDBB had run into financial difficulties and had been sold in 1969, with Herbert going into partial retirement and John Kelley leaving the firm. It is possible that the 1971 statement might have been an attempt by Herbert to strengthen his claim to the legal rights to the Seafly design.

No doubt Stan Herbert had contributed much to the development of the Seafly, probably including the development of moulds for a GRP version. However despite the later claims to the contrary, all the early documents show that the original designer of both the Mayfly and the Seafly was undoubtably J.V.Kelley.