The normal Seafly sail plan consists of a jib, mainsail with a full batten only at the top, and a relatively large spinnaker. Main and jib add up to to 120 sq.ft. (11.14 m2) and the spinnaker is 135 sq.ft. (12.54 m2).  Shown below are Australian diagrams  (dated April 1976 and provided by John Gascoigne) and a UK sail measurement certificate.  Whereas the maximum Australian dimensions are given, the UK certificate gives an allowable range. The two appear to agree within a few mm. 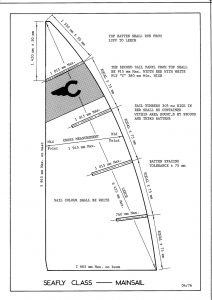 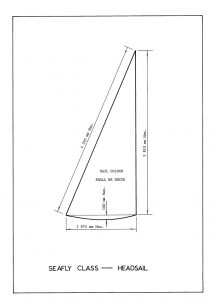 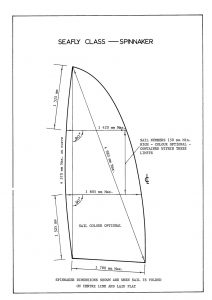 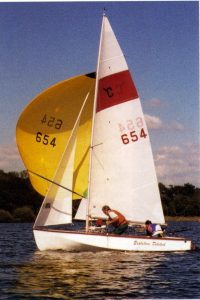 The photograph  shows a standard set of racing sails on possibly the last Seafly registered with the Seafly Dinghy Class Association (SDCA). These sails would have conformed to the SDCA measurement certificate. Probably the only change from the original Seafly specifications would be the maximum dimension for the “Cunningham”. However changes in the cut of the spinnaker (and improvements in sheeting and handling techniques) meant that in later years the spinnaker was flown on points closer to the wind than was possible with the original spinnaker design. 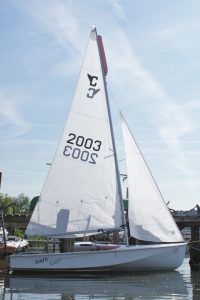 The Seafly built by Tony Longworth offered an optional, “Cruising Suit” with no battens and loose footed being designed for slab reefing. The lack of a roach and smaller jib reduces the power, being good for instruction or single handed sailing in stronger wind conditions. They also made experiments with using an asymmetric spinnaker. 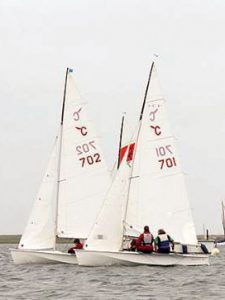 The Seafly SD produced by John Claridge Boats has sails conforming to the old SDCA rules except that the red panel is omitted. The reason is said to be that the coloured sail cloth has different stretch characteristics  making it difficult to obtain a good sail shape. However it is sad to see one of the characteristic features of the Seafly disappearing!